We provide VIP Meet and Greet service on arrivals, departures and connecting flights. Our greeter will assist you every step of the way during your jorney through the airport. Our service is available to all passengers, on any airline and in any ticket class.

Upon landing at Singapore Changi SIN a personal VIP agent will meet you at the gate of arrival, escort you through passport control and assist with luggage to your pre-arranged means of transport.

Our professional greeter will escort you from a curbside to the departure gate, assist with luggage drop off and fast track security passes. Then you will be escorted to a VIP lounge or the departure gate to pre-board the flight. Book VIP Meet and Greet service and get priority access through the entire airport!

Our professional agent will expedite you from the gate of arrival to your connecting flight without having to queue in lines. You will be fast tracked through passport control and security checkpoints. Then you will be escorted to the airline VIP lounge or the gate for pre-boarding.

Our agent will ensure careful and thorough airport baggage assistance for VIP clients, families or passengers with special needs, elderly or first time flyers from drop off to pick up to pre-arranged transportation ensuring a smooth and worry airport experience.

Our professional and dedicated agents will ensure secure and priority basis airport assistance for elderly or seniors, mothers and minors, first time flyers and non-English speakers, disabled or visually impaired passengers with the utmost care.

Upgrade your VIP meet and greet airport experience by booking a private luxury class transportation with professional and reliable chauffeur one way or round trip in all major cities. Travel to and from the airport with ease and comfort!

As previously reserved for royalties and head of state only, this unique experience provides you with direct access to VIP terminal and tarmac car transfer to or from aircraft via private VIP airport lounge. This bespoke experience includes private passport and customs checks by your dedicated security officer, complimentary refreshments and baggage retrieval. 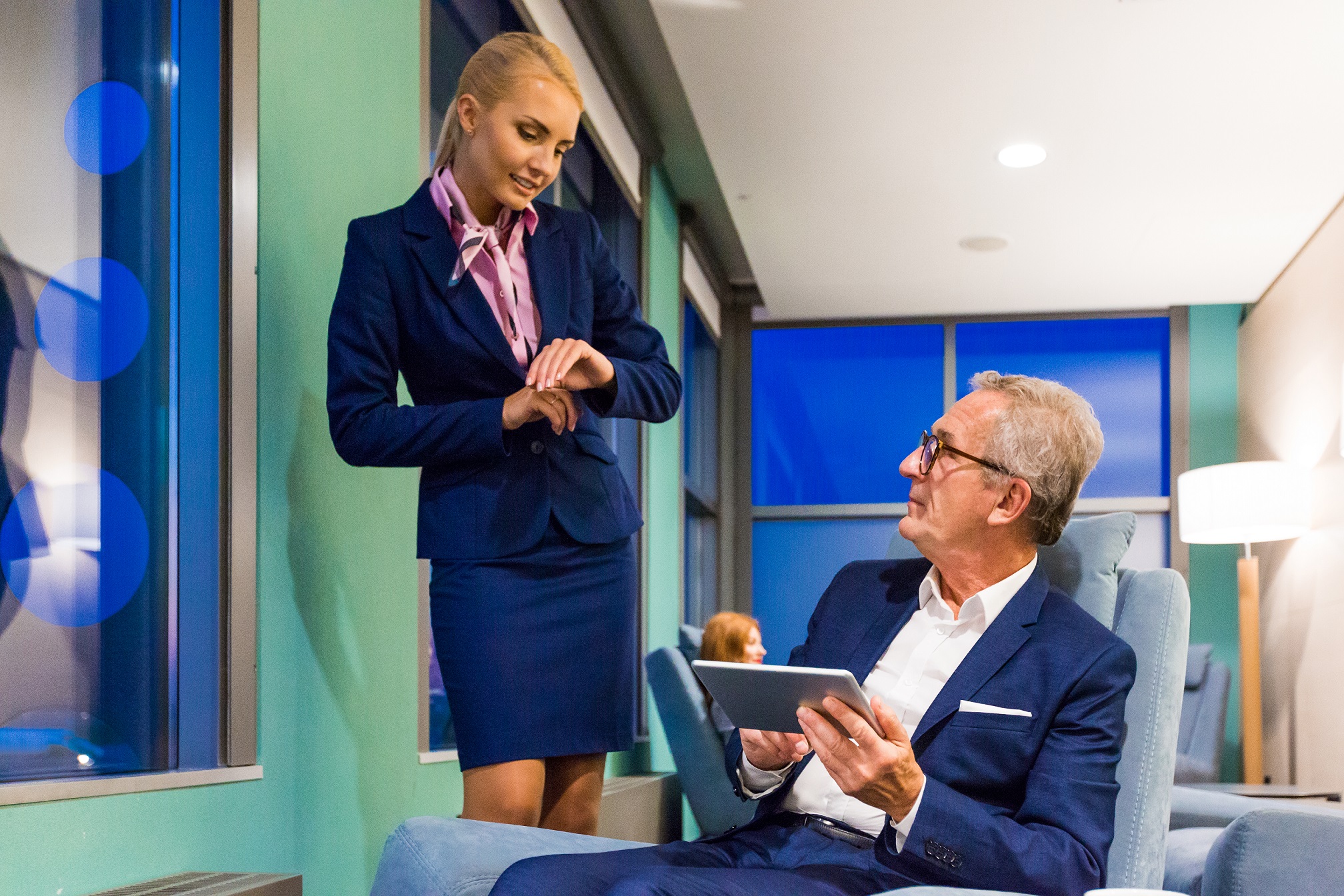 Apryl Stern
I had never used a VIP service such as this, but had a situation recently where my daughter was in a foreign country, didn’t speak the language, had an injury, needed to leave asap, and had to navigate through multiple terminals, baggage claim, customs, and getting to the correct gate. I hired Universal Sky Services (within 48 hours of her flight) and it was the best $400 I could have spent. While the gentleman that met my daughter didn’t speak much English, they were able to communicate and she knew he was a kind, thoughtful person. Everything was smooth until they got to customs and there was an issue because she had entered the country with her school group, but was leaving earlier than her documentation showed and was not with her group. The Sky Services agent was invaluable when it seemed like customs was not going to let her leave. He was able to help keep my daughter calm, and eventually, after several tense minutes, was able to speak to someone and help them understand her unique and pressing circumstance. I cannot thank this Universal Sky Services agent enough for assisting in such a stressful situation. I will now use this service for my own travel, and will recommend to anyone that asks.

Debbie Luksenburg
"Booked their services at the last minute and they really came thought for us. Very efficient and quick service. Would definitely book again. "

Osama Bawazir
If you are coming to Miami you will need this VIP service at the airport to save your time, from the door of the airplane to the hotel it will take 40min with there services

bertha makita
"Booked a last minute Meet and Greet in JFK. First time using this company and it was a very great service! Our VIP clients said that it was seamless!! Terrence was there when they walked off, with a sign and took care of everything- got their bags, moved with them, got them checked in to their next flight. I will use this company again ! "

VIP Meet & Greet Service at Singapore Changi SIN Airport is a personal service performed by a dedicated airport agent that meets and greets passengers with a name sign, provides extra help with completing all airport formalities and enables passengers to reach the gate of departure or arrivals terminal the fastest way possible.

Upon departure through Singapore Changi SIN Airport, the assigned greeter will meet passengers curbside at the airport and will expedite their departure though a fast security line, assist with luggage and VIP lounge access if requested until the plane is ready to take off. Upon arrival at Singapore Changi SIN Airport the greeter will meet passengers at the airbridge and escort through fast track or private immigration processing, help to collect the luggage and escort through customs directly to a pre-arranged means of transportation.Upon connection/transit through Singapore Changi SIN Airport, the agent will meet passengers near the air-bridge, escort to and through immigration or any security checks to a baggage claim to collect and recheck luggage if needed, obtain new boarding passes and expedite the departure the fastest possible way. After that the passengers will be taken to an airline or member lounge, or directly to the flight’s boarding gate.

Fast Track in Singapore Changi SIN Airport saves time and hassle and makes the passage through busy airports both fast and easy. Fast Track enables passengers to bypass lines in airports and be serviced on a priority basis.

VIP Meet and Greet Assistance through Singapore Changi SIN Airport is a personable service that provides immediate assistance upon arrival or departure with completing all airport formalities, bypassing airport lines, assisting with luggage and making sure all your needs are met. While the VVIP Terminal/ Tarmac service includes your own pre-flight executive suite with luxury room and dining amenities, private security and passport control check, dedicated porter and luxury car transportation to and from the aircraft.

Kindly let us know at the time of booking if you require additional services as such. The availability depends on the airport, terminal, number of passengers and pieces of luggage. Please note, not all the airports may have airside porters, buggies or VIP lounges, please let us know if needed when booking the services. The private transportation to and from the airport is available upon request at selected airports.

These services are offered at various pricing points, depending on the airport, whether it is an arrival, departure, or transfer service, and whether the lounge is being used. Package rates are available for services required on both arrival and departure. Pricing is also dependent on the number of passengers. You can contact our Support Team via email, phone, social media platforms 24/7 at any time of your booking process.

If you already have your booking confirmation please email us with the change request as soon as you can. We understand plans change, please cancel or modify your booking no less than 24 hours prior to a service to avoid a non refundable charge ( 3.8% terminal fee will be applied).

All the cancellations of VIP Tarmac services are non refundable. Some of the airports offer credit for future travels. Please contact us regarding the cancellation policy for Tarmac via email.

Tipping is absolutely optional and not expected. Our agent’s main priority is to make sure all your travel needs are met and executed.

The assigned agent will monitor your arrival flight time and make all necessary changes to meet you on time. If you are running late to the airport for your departure flights, please let your assigned agent know immediately, so they can adjust the meeting time.

Absolutely, all children are welcome. Please contact us directly with the child's age and airport details, as rules and regulations differ from airport to airport according to authority regulations. If you are traveling with a big group or interested in roundtrip service, kindly let us know at the time of booking as a discount can be applied if applicable.

Please contact us in case of urgent changes, such as lead passenger name change, service date, flight or amount of passengers change. As well if you wish to include additional services such as porter, buggy, lounge access or cancel additional service.

Every airport has its own rules and regulations. You will be provided a detailed description about your requested type of service in your requested airport. Don’t hesitate to ask if any questions arise. Please note, there are still some local COVID-19 quarantine & health regulations and rules in force in some airports. The permission to enter a country or to board a flight is decided by local border control, the local health authorities, and/or the airline and may be beyond our control.

Avoid long lines at the airport with our personal VIP assistance

We make arrivals and departures simpler, quicker and less stressful!

For services that are requested less than 48 hours ahead we will give a provisional confirmation, pending our affiliate confirming to us that they do have staff available and can get border control approvals in time.

Almost always we are able to arrange last minute services. In the rare cases where we cannot, we will tell you right away and will make a full and immediate refund of your payment.

At most airports, we may need to add a short notice surcharge of 100 USD.
Particularly when we have to bring extra staff at short notice. We will send a request for a late booking fee by email after you complete your booking.

Please note that a short notice surcharge in Cancun Airport is 100 USD per passenger.